Wrestling involves a lot of kicks and punches that cause agonizing pain. When one such hard blow is aimed at your head, there are chances of receiving head or traumatic brain injury. These can leave you with permanent disabilities like deafness, blindness, neurological sequelae, etc. You will not be able to continue with the sport and might even spend the rest of your life lying on a bed.

To wrestle without shouldering these worries, it is best to wear the necessary safety attire. These will minimize risks and increase your chances of walking around with a healthy upper body.

Hence, today, we will introduce some of the types of wrestling headgear. Find out which is suitable for you! 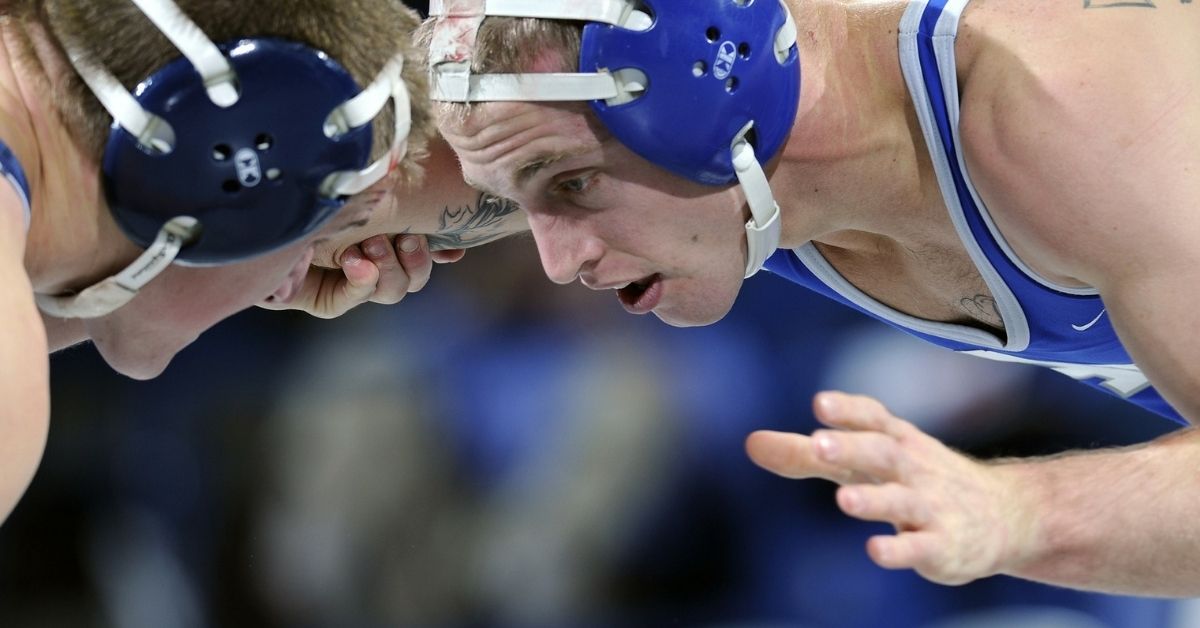 Although the name suggests otherwise, wrestling headgears were originally made to protect the ears rather than the head. This is because cauliflowers ears are a common occurrence amongst wrestlers–all thanks to head rubbing and constant punches.

Research has brought to light that cauliflower ears lead to increased chances of hearing loss and ear infection. Both of these can cause fatal effects on people, resulting in the manufacturing of head safety gear.

Lately, however, with increased resources and machines, people have also started focusing on protecting the face. This is because dismantled jaws, broken noses, and black eyes are not issues that should be taken lightly either.

Without any further ado, let us walk you through some types of wrestling head safety gear!

Ear guards are the most popular wrestling headgear. They consist of two shells or cups that will shield both of your ears. Both of these cups are fastened to the wearer’s head using straps that run above the head, beneath the chin, and through the back of your head.

An ear guard allows proper ventilation to let wrestlers listen in to instructions. Delicate ear tissues of wrestlers are kept intact despite the strength of the blow received. They also work to prevent the ear from encountering friction while making a bad landing on the ground.

Wrestlers are regularly encouraged to wear ear guards. In fact, it is made a must for school or college wrestling matches. This is because, at this stage, the wrestlers are still learning about several blocking techniques. When it comes to state, national, or international tournaments, rules might differ. Some will forbid you from wearing head safety gear, while others will make it a must. Many will also give you the option to choose whichever you want.

Hard Shell Ear Guards: These are usually made out of a combination between plastic and foam. They provide increased protection and the foam can also absorb shock from impact, causing a significant decrease in hearing loss. Despite being durable and strong, these materials provide better communication. Wrestlers can easily listen to the advice given by their coach.

Soft Shell Ear Guards: These are usually made by hand rather than machines. Softer materials are used which increases the comfort of usage due to flexibility. However, it is important to mention that you will be paying for this comfort by cutting down your safety. Decreased durability also allows them to easily tear when faced with friction.

Unlike ear guards, face guards also safekeep the nose, head, face, jaws, and forehead along with the ear. Their protection automatically makes them the more expensive option. Such wrestling headgears provide coverage to the entire face except for the eyes and lips.

Face guards are made of extremely durable materials like Velcro or durable plastics. They have two straps that connect from one side of the face to the other. Another thick strap is present that starts from the forehead and connects to the middle of the other two straps.

Face guards are not as commonly worn as ear guards. This is usually because of the cost or unavailability. They are rather expensive and cannot be afforded by all wrestlers. Besides that, not all matches allow you to wear face guards as it is said to ruin the fun.

Even though this is not traditionally made for wrestling, many tend to sport it during practices for its protectability. Taekwondo head guards are designed to protect the head from high kicks and falls. They, thus, manage to be extremely protective towards the ears, head, forehead, and jaws.

A taekwondo head guard is usually available in the colors red, blue, and white. They form a shell around the entire head and expose the face. The forehead, however, is protectively covered. The headgear ends at the jaw and the left and right sides are connected via a strap.

Many other martial arts headgears have been converted to match the needs of traditional American wrestling. Recently manufactured ones also manage to cover some parts of the cheeks to provide increased safety features.

Although these do not protect the entire head, they protect its essential features as ear guards do. Chin guards, as you could have guessed from the name, do an amazing job of protecting the chin. This, in turn, prevents hurting gums and teeth when you make a fall or receive a blow under your jaws.

Mouthguards do an extremely important job at saving teeth from breakage. By doing so, they also manage to keep your gums safe and avoid the dreadful visits to your dentist’s place.

Mouthguards are usually made of Ethylene-vinyl acetate, which is a polymer with incredible strength. It does not weigh too much and can be easily fit in. Making it requires a specialist who will perform scans or make molds around your teeth.

Importance of Wearing a Wrestling Headgear

As we mentioned in the beginning, wrestling is a deadly sport. However, many people enjoy it while others think of it as a source of entertainment. Several movies like Rocky, Southpaw, Raging Bull, Million Dollar Baby, etc. stand as evidence of this fact. Thus, for several generations, people choose to engage in wrestling or boxing and make a living out of it. But what happens when you hurt your body and are unable to continue with your passion?

To eliminate this question from wrestling itself, wrestling headgears were invented.

Wrestling brings along several risky medical conditions besides the thrill. From concussions and black eyes to far serious problems like erupting blood vessels in ear canals.

Long-time wrestlers are advised to put on headgears. Constant exposure to blows and punches causes blood to form lumps in veins and arteries. One of the most dangerous problems though, is cauliflower ears–also known as wrestler’s ear. This condition occurs when a large impact is applied on a person’s auricle or pinna. This is the part of the ear that we can see. Blood flow to the ear cartilage is disrupted, causing an auricle hematoma. When this is not treated properly, it festers to ear infection, necrosis, or even cartilage loss. All of these can be fatal to the ear.

Research has also proven constantly that wrestlers are prone to SRC (sports related concussions) and CHI (close headed injuries). Besides that, a huge number of cases related to CTE (chronic traumatic encephalopathy) have been linked to wrestlers or boxers.

Now, we know that wearing headgears does not eliminate the problem. Nevertheless, headgears hold the power to cause a decline in the risks. They absorb a huge portion of the force applied meaning that less of it gets to travel to the head and cause hurt. This automatically decreases the hindrances caused to blood flow, muscles, or nerves.

Hence, even if you are not allowed to wear wrestling headgear during the match, do put it on during practices and sparring sessions. You can also help future generations of wrestlers and boxers avoid a dark future by being their headgear wearing icon.

Headgears for wrestling are only available in two sizes – the youth size and adult size. Children under 10 should opt to use the youth size while others should seek the adult options. Modern-day wrestling headgears have adjustable straps which can be altered to fit heads of all sizes and shapes.

As the person wearing the headgear, you will know about your fit the best. Like with other headgears, the fit should not be too tight or too loose. A loose ear or face guard will slip out during your wrestling match and make a hassle. It is also rather embarrassing to have that happen to you.

On the other hand, tight wrestling headgears will cause your head to ring after every blow you receive. Punches are painful enough, so we are sure you do not want to add to that with pressure caused by your head guard.

After putting on your headgear, try pushing the ears down. If doing this causes the straps to come loose, you should have them readjusted. You should also check whether your headgear hinders your vision. All the head straps should be above your eyebrow; they should rest on your forehead. If your headgear consists of chin cups, then remember to make sure that they are centered. This shows that they are in the right position and will not slip off.

Following these steps will help you choose a wrestling headgear that is ideal for you.

No, Olympic wrestlers are forbidden from wearing ear guards or any other type of headgear. The only protective attire that they can put on are kneepads, i.e., as long as it is light.

Is headgear allowed in freestyle wrestling?

Although most wrestlers do not put on headgear during freestyle wrestling, it is allowed. Headgears are made optional, but only wrestlers with medical conditions will sport them.

Blunt trauma aimed at the auricle causes cauliflower ears. This means that if you use a large object like your fist to exert a huge force on somebody’s ear cartilage, they can suffer from cauliflower ears.

Cliff Keen Athletic was the first to manufacture wrestling headgear. This was about 66 years from now but they still manage to dominate the market due to their high-quality products.

Now that you have been introduced to types of wrestling headgear, do not shy away from putting them on. They are extremely useful pieces of equipment and should be always worn to avoid long-term medical damages. Do not ruin your future due to your pride and instead, spend your time practicing hard to win. Fight diligently!

Paul, a graduate from the University of California, has been a Safety Advisor for over 5 years in USA. Along with his other 2 partners, who are professional bikers, he has been the chief of the headsafetyguard.com to create mass awareness on an often neglected issue: HEAD SAFETY